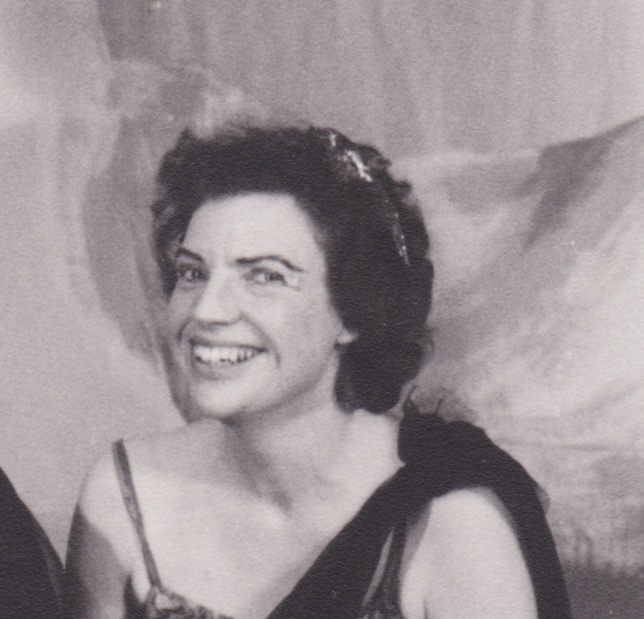 Photo: Sheila in Orpheus in the Underworld (1974)

Sheila Howard’s name might not feature frequently in many versions of Southampton Operatic Society’s history but over three decades she was a driving force in the development of the group. Sheila was a fine example of the member who works tirelessly to improve things and becomes the glue that helps bind the Society together.  In particular Sheila should be remembered as being very involved in the formation and running of the Junior Section.

Sheila joined the group in 1972 and between 1973 and 1995 she performed in 35 SOS productions – with the exception of playing a housekeeper in Die Fledermaus she was always in the ladies’ chorus. Sheila particularly enjoyed the rousing operatic choruses of Gilbert and Sullivan so was fortunate to appear in HMS Pinafore (4 times), The Mikado, Ruddigore, The Gondoliers and The Pirates of Penzance (all three times), The Yeomen of the Guard, The Sorcerer and Patience (twice) plus Iolanthe, Princess Ida, Trial by Jury and The Zoo. She was also involved in three productions of Orpheus in the Underworld, two each for Carmen and Die Fledermaus plus La Vie Parisienne, The Beggar’s Opera and L’Elisir d’Amore. Sheila would have been totally involved in all of these shows, for example; the director of the 1989 production of The Mikado wanted to include something unusual so Sheila wrote to the Japanese Embassy requesting details of the Japanese Tea Ceremony – she then used these notes to rehearse a small group into performing it on stage during the interval.

Similarly, when the ‘Future of the Society’ sub-committee recommended that a junior group should be formed thus ensuring that the group always had a potential supply of young members, Sheila was one of the first to become involved at the planning stage. A small group of members provided afternoon ‘master classes’ at three Southampton schools before 20 performed HMS Pinafore in the school halls in the evening. The children who were attracted to the idea of belonging were then auditioned and the Society’s Junior Section was formed (it made its debut nine months later with a production of The Mikado at the Avenue Hall).

Sheila volunteered to become the junior group’s treasurer and held that position until 2002. This often involved far more that keeping track of its finances and setting budgets and Sheila found herself helping at rehearsals, chasing subscriptions, organising fund raising, hosting meetings, acting as matron, etc.  Since retiring she continued to support the Society mainly as a Front of House volunteer during show weeks.