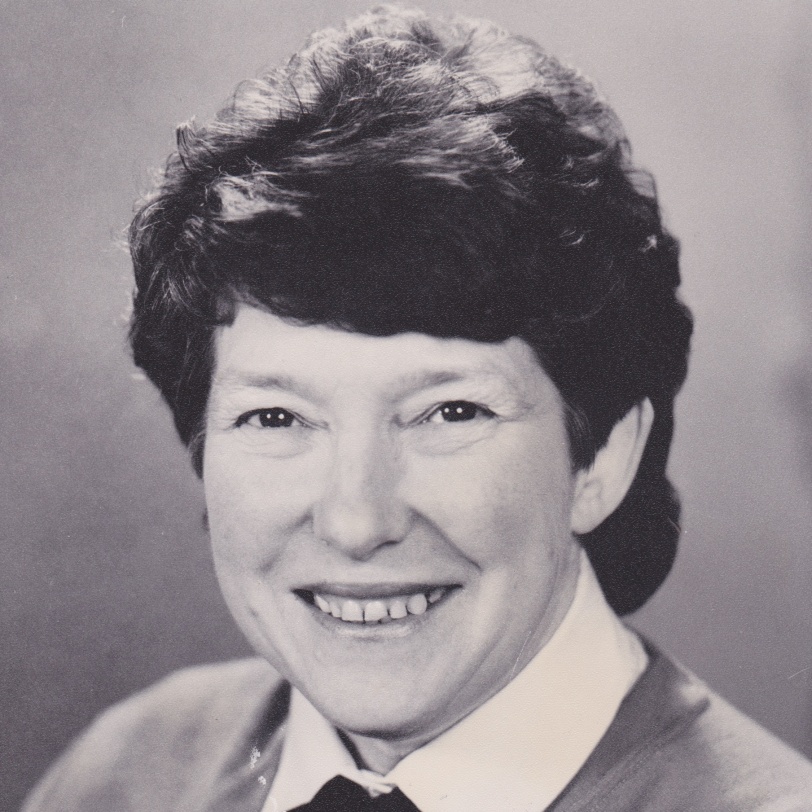 No doubt every society can point to a particular member who has done so much for them that they come to epitomise its very existence but few could match the life long contribution of Pam de Grouchy to Southampton Operatic Society – she first appeared on stage with the group in 1953 and was still active shortly before her death in 2011.

During those fifty-nine years, she had been chorus member, principal, director, assistant director, committee member, Society representative, Chairman, co-founder of the Junior Section, member of the new members’ auditions panel, cabaret singer, front of house helper, rehearsal tea lady and Matriarch of SOS! She had the remarkable ability to reinvent herself to suit the current situation.

In 1952, at the age of seventeen, Pam (then Fulford) auditioned successfully to be taken on as a principal with the D’Oyly Carte Opera Company but her father thought that she was far too young to be touring around the country as a professional performer. Just over three years later she married another SOS great, John Hoskins, and they were cast in principal roles together for over twenty years.

Two clips of Pam playing the part of Little Buttercup in the 1991 production of ‘HMS Pinafore’ can be seen at:

As well as performing in the above shows, Pam was also heavily involved as a Director or Assistant Director in another seventeen productions…

The 1983 production of The Mikado proved to be a high point in the society’s history as it marked the first time that SOS performed abroad! The show, complete with cast, players from the Southampton Orchestra, the set and costumes were transported by ferry and coach to Bad Ischl in Austria where it was performed (twice) at the Kurhaus – one performance was in the presence of the grandson of the old Archduke Franz Joseph, the Director of the Vienna State Opera, the Director of the Salzburg Opera and the President of the Bad Ischl Operatic Society.

John Hoskins died in 1985 and soon after Pam dedicated herself to co-forming the Junior Section (now Debut Youth Theatre), she directed their first two shows The Mikado (1988) and Iolanthe (1989) and, along with her second husband (Philip de Grouchy), repeated this for two Old Time Music Halls (1990 and 1992), meanwhile she acted as Wendy (Dalton) South’s assistant in many other productions. One of Pam’s great gifts was the ability to spot talent in young people and it was she who first recognised the potential of Claire Rutter when she cast her as Yum-Yum in the The Mikado (1983) and this was repeated with the Juniors when Rae Baker and Nyle Wolfe made their stage debuts – all three have gone on to have successful careers in the professional theatre.

Pam’s productions would not have upset any traditional G&S fanatic but they always had something ‘extra’ to add to the experience, e.g. a Queen Victoria complete with John Brown sat in the ‘royal box’ during Pirates of Penzance, King Gama was thrown into a ‘prison’ situated in the Guildhall foyer during the interval of Princess Ida, Dr Dulcamara arrived in a very realistic steam train in L’Elisir d’Amore, etc.. Her attitude to directing and performing is best summed up by her own words, “We may be amateurs but that doesn’t stop us from being as professional as possible.”

Pam served on the SOS committee from 1974 to 2009 and as Chairman of the Society from 1993 to 1998 – her efforts for the group were officially recognised when she was made a Life Member in 1989. She was also awarded the City of Southampton Award for her services to musical theatre on two separate occasions! She also added greatly to the social side of Society life, her New Years’ Eve parties and Sunday afternoons at her beach hut in Mudeford serving to bring old and new members together and creating a unified Society with a sense of its own history and future.

The Society Pam joined in 1953 was very different to the Society she left nearly sixty years later, back then principals had little to do with chorus members and the organising committee seemed to have delusions of grandeur, the transition from this to a more open and friendly society owes much to her personality and commitment.