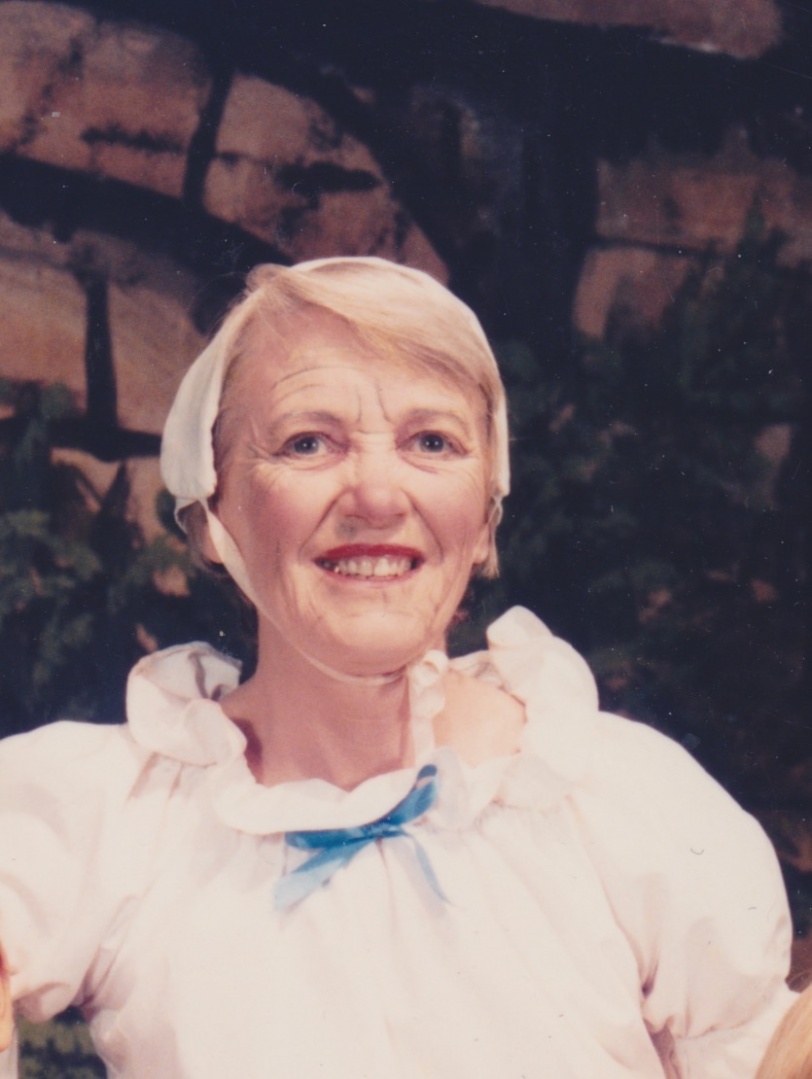 In 1969, when the Society began to make its own scenery at Nursling, the Hon Secretary at the time, reported to the AGM, ‘A contributory factor to the overall success was the bright and colourful scenery, all of which was designed and constructed in the Society’s own workshop by Mr Robert Gibson, aided by his wife and an enthusiastic stage crew.’ Technically, the statement is accurate but it does completely miss an important factor – Molly (Bob’s wife) was not just a helper, she was an essential part of a team. Indeed, they were a major creative force behind the development of the group.

Bob and Molly moved to Chandlers Ford in 1963, they soon joined SOS and made their debuts for the Society in Patience 1964. Initially, the pair did not appear on stage every year, as IBM sent Bob to America for six months plus a young family of four had an obvious effect on availability.  However, it was in 1968 that the Committee accepted a sub-committee’s recommendation that the Society should make its own scenery. Both Bob and Molly were quickly heavily involved in making Nursling Parish Hall a functioning scenery store. Molly excelled as a set designer, builder and painter and in 1969 the group performed Princess Ida in front of its own homemade scenery.

Their daughter, Jean (born in 1965) reminisces, ‘We were all very much part of the extended SOS family, helping create scenery, lug it all to the Guildhall, then change sets, until setting our own agenda in our teens.  I remember those 6ft flats were a bit of a handful if it was windy!’

Between 1968 and 1979 Bob did not perform on stage, instead he worked on the set designing and construction and then performed Stage Manager duties during show week. Similarly, Molly concentrated on designing and building sets from 1968 until 1982 – the extra time spent backstage was due to her accepting the position of Stage Manager for Iolanthe (1980), La Vie Parisienne (1981) and Patience (1982) and so became the Society’s first Lady Stage Manager.

Molly appeared on stage with SOS in 25 productions between 1964 and 1994 and 22 of these took place after 1982, prior to that she was a regular member of the stage crew. Other behind the scenes activities carried out by Molly involved designing and constructing scenery, directing others in this area, painting sets and even serving as ‘Mistress of Properties’.

Carole Westbrook, who often worked on the scenery with Molly recalled, ‘When we did Orpheus in 1987, she and I made some corrugated cardboard ‘statue’ plinths  for the Guildhall foyer. People painted up as statues stood inside the cylinders we made, and moved and spoke to the audience as they came in. Hoping to raise a few startled laughs! I had to take my four year old daughter with me and at one point she got rather bored with her drawing and started to act up a bit. I was embarrassed and told her off a little impatiently. Molly was very kind and polite to her, saying something like ‘Could I suggest…. you might like to…’ etc, easing things very nicely and getting immediate co-operation! She was a very kind person and it was such a good example of that.’