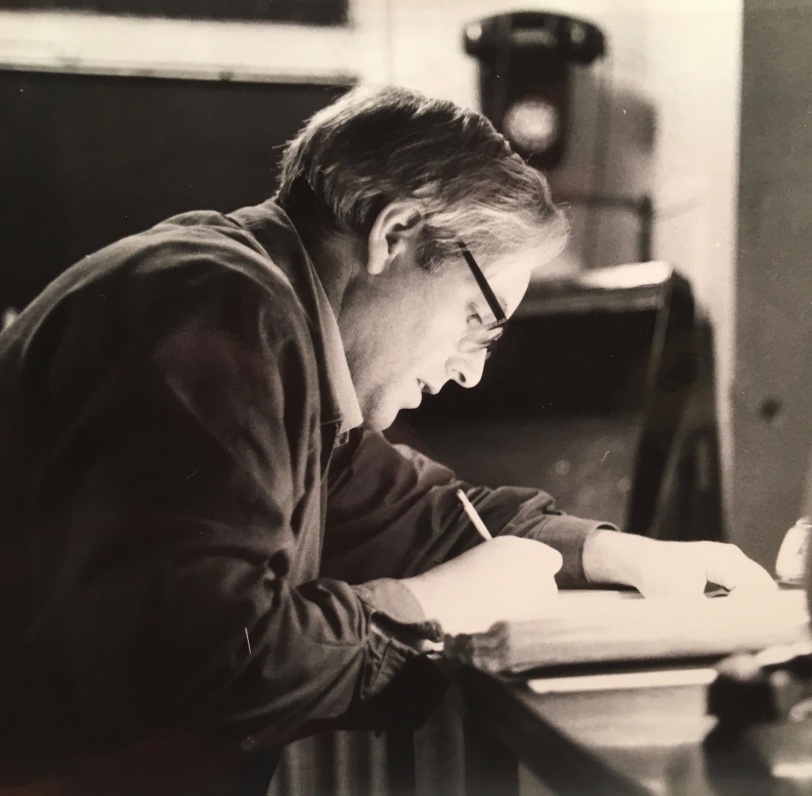 Doug Huggins wrote an interesting article for SOS News in which he compared the Society of 1954 with that of 2004. He noted, ‘In those days people stuck to their roles: singing, acting, costumes, scenery, makeup, business. Only over the years was there a change to members being involved over the board. Molly and Bob Gibson were excellent at this: acting, singing, making scenery and costumes, lighting and stage management – the whole theatrical experience.’

Bob was born in 1931 in Manchester and in his youth developed an interest in electricity, radio, engineering and the theatre. A visit to an annual drama festival and a series of jobs related to machines resulted in Bob marrying Molly in 1959, working for IBM, moving to Chandlers Ford and, of course, joining Southampton Operatic Society in 1963.

It did not take Bob long to make his mark at SOS, in 1966 he was highly critical of the stage lighting at the Guildhall and insisted that steps were taken to improve it, in 1968 he solved the problem of the theatre being booked for a school’s concert in the afternoon by removing and storing the set and apron stage and then reassembling everything when the concert finished. Also that year Bob led a sub–committee to investigate whether the group should 1) perform at the Mayflower (Gaumont), 2) perform a non G&S opera and 3) make its own scenery – the recommendations were 1) Probably not, 2) Yes – a challenge is good and 3) Yes as a matter of urgency!

The decision to make our own scenery was thought essential because hiring sets locally was very difficult and we had plenty of people keen to be involved, hence the Society embarked on creating a scenery store at Nursling organised by Bob and Molly. Bob reminisced that ‘We had to learn how to paint scenery – it is painted with the flat lying down and the brush at arm’s length but it will be viewed by an audience where the nearest people will be about 100 feet away. We started by propping up a flat outside the building and viewing it from the other side of the road!’The first beneficiary of the store at Nursling was Princess Ida in 1969, the Secretary’s Report at the time stated, ‘A contributory factor to the overall success was the bright and colourful scenery, all of which was designed and produced by Mr Robert Gibson, aided by his wife and an enthusiastic stage crew.’

The production in 1972 had to overcome the problems created by the miners’ strike and the three day week. Electricity to areas in the City was often cut off for three hours, usually this was announced beforehand but not always. The group once changed the rehearsal venue to a presumed ‘safe place’, but a power cut at the University meant that the session only carried on thanks to oil lamps sourced by Bob. He also made arrangements in case a sudden cut happened at the Guildhall during the show, he planned to use Calor Gas floodlights for the stage and battery powered lanterns elsewhere.

Bob also came to the rescue in 1979 when the Guildhall invoiced the society for Performing Rights Charges for Ruddigore and added that they would have to charge for all shows from 1975 – panic set in until Bob pointed out to the Committee that the theatre had no right to do so as, apart from Carmen, the shows in question were all out of copyright. Money was also saved after the Committee considered abolishing the payment of honoraria to the Production Team. It proposal was not acted on though Bob did donate his back to the Society…

Bob performed in 28 productions between 1964 and 1994, in 1984 he became SOS’s first Production Manager and notably served as Stage Manager for eleven years – however, he was frustrated at being required to re-audition whenever he missed a show so eventually decided that he would leave that task to others (one of them being Molly).